He brings personality, fun to work in Anoka

Office support assistant Charles Weaver is carrying on a family legacy of public service, and he does it with the same name and workplace as his father, and his grandfather. Both were attorneys for Anoka County.

The youngest Charles, who has Down’s syndrome, went by Chaz for many years. Then he saw a portrait of his grandfather, who is honored in a county law library quiet room. From that point on he was “Charles,” explains his father, Charlie Weaver. Things got more interesting from here.

Charles Weaver, III, 26, has somewhat convinced himself that his grandfather was actually his father. The two have never met. Grandpa Weaver died before Charles was born.

Charlie (his father) has brothers and sisters and they go to the cabin, said Charles’ mother, Julie Weaver. “He wants to be with them.” Charles lives with his mother. 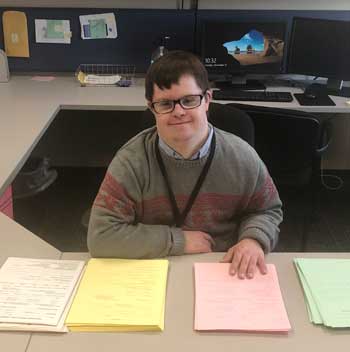 “The fact is that he loves my brothers and sisters and wants to be part of that group,” Charlie explains. “He doesn’t see himself as one of the ‘other kids.’ He just loves to hang out with his aunts and uncles.”

When Julie takes him to dental appointments, Charles gives a birthday from 1978, not his actual birthday in 1992. As staff question him further, he answers, “She’s my other mother.”

“We have a lot of fun in our family. He takes it to another level sometimes,” said Julie.

The fun can sometimes extend to work. “My boss is pretty crazy,” said Charles. “She thinks I’m a devil.”

Charles found part-time employment in the office through the Bridges program. It’s offered to high school transition students in the Anoka-Hennepin school district, said administrative coordinator Laurie Larson. She worked with him with Bridges for years and now serves the county attorney’s office as an employee.

Charles works with mail, makes copies, applies labels and keeps the machines filled. Office supplies need to be inventoried, updates are made to statute books, brochures are handled and things are recycled.

Others with disabilities work here, as well. He does similar work on an crew for the county’s human services office. That group is supported by Achieve Services. The jobs run for about two hours a-day, each, on weekdays.

Sensitive, aware and engaged with community

He is the oldest in his family, and is very sensitive toward others, according to his father. This has had a great impact on his siblings and their friends. “Both Julie and I consider him a gift from God,” said Charlie.

Charles served as an honorary voting member of the Anoka Hockey Association. He first attended sessions with his father and then on his own for a couple of years. Others would pick him up to go to meetings.

He’s highly connected on the phone and through social media, and has had opportunity to meet leaders of large Minnesota companies through his father, who leads the Minnesota Business Partnership.

Straight to the top

Charles received a Polaris Ranger utility vehicle as a graduation present and got a flat tire one day. His mother offered to get it fixed. “I didn’t think anything of it,” said Julie.

The next day, a delivery from FedEx shows up with a new wheel and tire. Charles had called the CEO of Polaris to ask for help and he sent it. “You have to apologize,” his mother said. “I told him I would fix it and he didn’t even give me a chance.”

Attending a “sign the bill” event at the Capitol earlier this year to fix the 7 percent cuts to disability services, Charles spent some time with his uncle (who he calls his brother), Tom Weaver, the CEO of Achieve Services in Blaine.

The work on the Achieve crew and as a county employee have made him more independent. “I do want him to be fulfilled, have friends and a place to go that’s welcoming, a place where he feels needed,” Julie said. Charles gets rides to work from his mom, and from Achieve.

His long-term goal is to work for a sporting goods store, said Julie, who explained that he loves his jobs with the county. 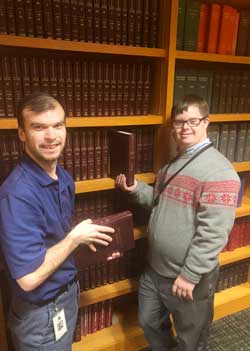