Direct Support Professional Kaye Johnson proves that listening and asking individuals to identify their preferences can change a participant’s outlook and renew one’s motivation for work.

Johnson provides direct support to individuals working in the Abilities Enterprises division of Ability Building Center (ABC) in Rochester. ABC is a member of MOHR.

Participant Jay Kirgis was in the Navy before he came to ABC. He had few work opportunities after his military discharge. A case of undiagnosed Huntington’s disease, and its breakdown of nerve cells in the brain, had led some employers to believe he was intoxicated. 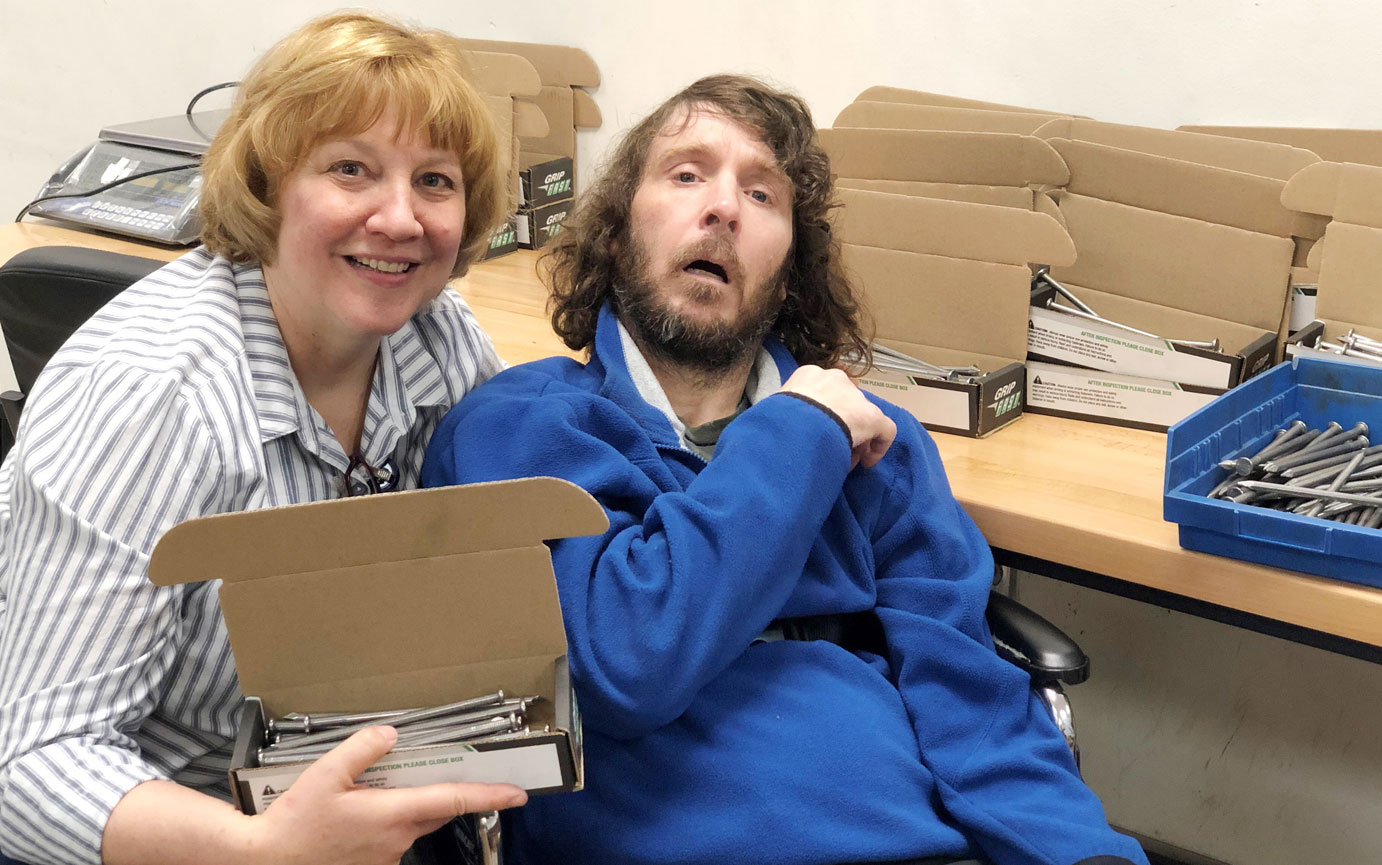 Johnson worked with Kirgis for 18 months. From the start, she noticed he was unmotivated and frustrated by his lack of independence and success in completing work assignments. Although diagnosed with Huntington’s in 2005, more recently the disability progressed to affect the function of his hands and his balance, and limited his verbal communications. As frustration with work tasks mounted, he chose to be involved with leisure activities.

After a few months of warming up to Johnson and recognizing her concern, Kirgis began to change his attitude. She used her listening skills and a knack for creating innovative adaptive devices to make some changes.

Johnson asked about his work preferences and found a way to make them a reality. His favorite job was putting nails or screws into jars, but the task was increasingly frustrating due to the decreasing functionality of his hands. To solve this, Johnson created a funnel from PVC pipe so he could slide nails or screws into each jar. This caused less of the product to end up on the floor, a major relief for Kirgis.

The DSP also made it possible for Kirgis to spend the afternoons unwinding with activities he enjoys. She created a book “All About Jay,” that includes his daily schedule and routines. It shows the setup of his desk, which helps him to be efficient, and, most importantly, it lists his likes and dislikes. The likes include listening to 70s and 80s rock music and watching monster truck videos. Some dislikes are Elvis Presley and watching sports.

To keep him motivated, Johnson also searched for his favorite activities. “That’s an easy one,” she says, “It’s drinking Mountain Dew.” She made a sign for his work area that says, “Increase your productivity, drink Mountain Dew.”

The participant also wanted work to be meaningful. The DSP explained that filling the jars with nails or screws allowed them to be sold at hardware stores, which helped him recognize the value of his work.
ABC staff now sees Kirgis jumping right into work each morning to start his tasks for the day. “He loves coming to work,” says Kelly Haack, his program coordinator. “He wants to come to work no matter what the weather is. Working and making money is important to him.”

Group home Manager Kim Sonnabend has worked with Kirgis for five years. “Jay loves going to work. All he talks about is how hard he worked that day. He is very happy,” she said. Knowing his love of music, she was pleased to hear that ABC got him a radio that can be turned on with one push of a button.

Staff say Kirgis’s success could not have happened without the caring work of the DSP who listened to his needs and adjusted for his everyday tasks. Johnson said families of ABC participants appreciate this specialized attention, which helps their relatives find more joy and productivity in each day, regardless of a disability’s progression.