The cast-offs of Cottonwood County will be cut, sewn and bound together by people with disabilities to be sold as rugs, table runners, place mats and dog toys. In the little town of Windom, this is a prime opportunity for many. Rugs number in 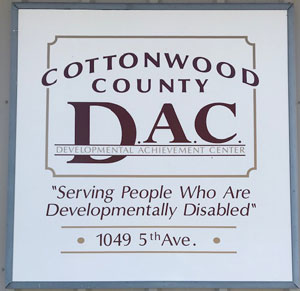 the hundreds and are sold by retailers.

Eighty-four percent of the individuals served by Cottonwood County DAC help with rug production. They’re paid a piece rate made possible by the special minimum wage provisions that are afforded to such programs. Some refer to it as a reasonable accommodation. Without it, said DAC Director Rhonda Haglund, this dignifying work and all of its benefits would disappear.

“We want to keep contributing,” said Haglund. Before the rug projects began in about 1970, the program only offered recreation and leisure opportunities. “We don’t want to go back to that,” she said.

Small town in the middle

With a population of 5,000, Windom is a bit of an agricultural island. It’s an hour’s drive west from the southwestern Minnesota regional center of Mankato. The much larger Sioux Falls, S.D. just over the state line, is an hour and a half further down the mostly quiet highway.

Compared to the Twin Cities, there are fewer people, fewer businesses, and fewer options for individuals with disabilities at Cottonwood County DAC. The nonprofit serves 56 people, relying on a staff contingent of 19. Its radius extends 30 miles.

The rug roots can be traced to the family of a participant who was legally blind and had two loom machines at home. They were donated in hopes that she could be trained to use them. The woman never wanted to do the weaving but other people “took off with it,” said Haglund. She passed away last year, and was the DAC’s longest-term participant.

The DAC is one block from Windom’s traditional town square. Staff and participants walk to get the mail, and bills are paid in person so the people they serve can practice their social skills, Haglund explains.

While the operation serves people with disabilities at 20 different job sites in and around the area, Haglund said opportunities for independent employment are limited.

One of multiple jobs

Chuck Collin has worked at the DAC for 35 years. When in-center, he spends about half of his time sewing and half weaving. He also works at Godfathers Pizza one day a week, in an office and as a sub for other crew members, the director explains.

“He’s super friendly with the guys,” said Haglund, and serves as a work mentor for people who need additional support.

“Our guys come here after often being picked on in high school,” said Haglund. “They come and can help someone less fortunate than themselves, and that makes them feel really good.”

It's the check, not the amount

Productive work is engrained in the southwest Minnesota culture where pay day is a big deal, Haglund explains. One individual rug production worker was out for a month for surgery and returned when checks were being issued, but wasn’t set to receive one because he hadn’t worked.

“We weren’t going to get him out of the building without one, so our administrative assistant made him a check for $0 and 0 cents,” said Haglund. “He was happy as a clam.”

For people with disabilities on assistance, having work is often more important than the amount of pay. The rug projects utilize people at all ability levels. Strings are pulled and materials are ripped and sewn. Work on a loom is the most difficult, Haglund explains.

Operating the looms is the hardest job and is done in steps. Supervisors stay close at first, then gradually walk away as the job takes a month or more to learn.

Nathan Wehmeyer is up for the task. He had an independent job at a restaurant, but is much happier when he works on rugs, the director said. He also works on crews in the community.

Wehmeyer said he likes his friends, the staff, his schedule and the DAC parties. He saved his earnings and bought a four-wheeler. And, he’s putting funds aside for an upcoming trip, said Haglund.

He makes trips to pick up materials, and to the retail stories that sell the rugs, where he’ll straighten displays. Wehmeyer lives in an apartment on his own. 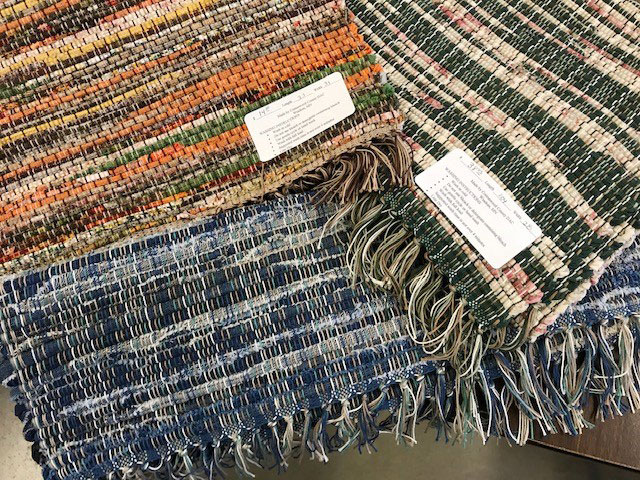 People learn work skills, enhance their work ethic and learn to follow directions. Individuals listen to their supervisors, and learn to not get frustrated with something doesn’t go just right, Haglund explains.

Another individual, a middle-aged woman with a traumatic brain injury, pulls strings off. The work is very important to her. She can get visibly angry if she can’t come to work for some reason, said the director.

All staff do direct care and wear many hats, and it is rewarding. Participants are always happy to see you, she said. “They are always so excited about everything.”

Participants help sell the rugs at a farm and home show in March and a Christmas show held at the hospital each year. And, there are “crazy days” sales downtown. Selling the rugs builds money handling skills, she said.

“For the most part, our community has been very supportive,” said Haglund. Learn more about the DAC's rugs here.